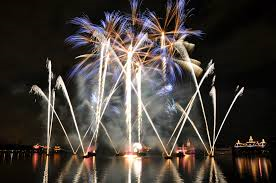 Setting up the event takes a Herculean effort!

When it comes to the first day of our event and the RV’s start rolling into the park and the crowds start filling the carnival rides a lot of work has already been completed to make it all run smoothly.

The week leading up to our event we meet in the park to get started with the tedious job of setting our perimeter fencing around the launch site. This is, of course, one of the most important jobs to ensure the public is kept at a safe distance from the fireworks shells being launched during the display. The launch site fencing is only a small part of the roughly 5 miles of fencing that is erected leading up to the events start. Putting up this amount of fencing entails an assembly line (army) of workers as one truck goes along and drops over 500 posts (one every 8’). The next truck comes by with a tow behind compressor for pounding each post into the ground. Followed closely behind the post pounder is the trailer full of rolls of fencing dropping a roll every 40’- 50’.

Then comes the fun part with our 15-25 volunteers walking the entire perimeter of fence posts and unrolling each roll of fencing and standing it up to attach to the posts. Once the roll fencing is completely set-up we turn our attention to the steel fencing panels which we use in areas that we cannot pound posts into the ground. Typically the placement of fencing for the entire festival takes about 3 full days.

Once the fencing is completed the 350 + trash barrels need to be distributed throughout both parks. Just the day before the event several vendors need to be coordinated in placement of the necessary services that we need, over 100 porta-jons need to be placed, tents, tables and chairs, vendor trailers as well as the merchandise vendors all need to be placed in the correct location. Next we start to decorate for the event, we line the riverfront with 75 flags up and down the seawall on both sides of the river. We hang a 30 x 50’ flag over the Wenonah park bandshell as well as the many service flags draped along the stage’s backdrop. The final touch is typically the hanging of all our great sponsor banners throughout prominent locations in both parks.

If you think this sounds like a lot of work you would be correct because it is, but think about this for a second…………………….IT ALL HAS TO COME BACK DOWN AND BE RETURNED TO STORAGE.